Harms Hardwood is a company rooted in the flooring industry since 1959, and we're here to stay.

We are all about you, our customer. We're committed to using family, pet and environmentally-friendly floor finishes that are safe and durable.

Harms Hardwood is the only provider in our area to feature the Bona dustless refinishing system, designed to help keep your home (and the new floor finish) free from dust and contaminants.

Harms Hardwood also employs craftsmen with the ability to do custom wood floor colors and finish techniques most of our competitors would deem impossible. Our motto is 'Your floor, your way'.

We've never done a floor with live edge 500-year-old swamp oak before, but we do love a challenge. This one is from Ukraine. 👏 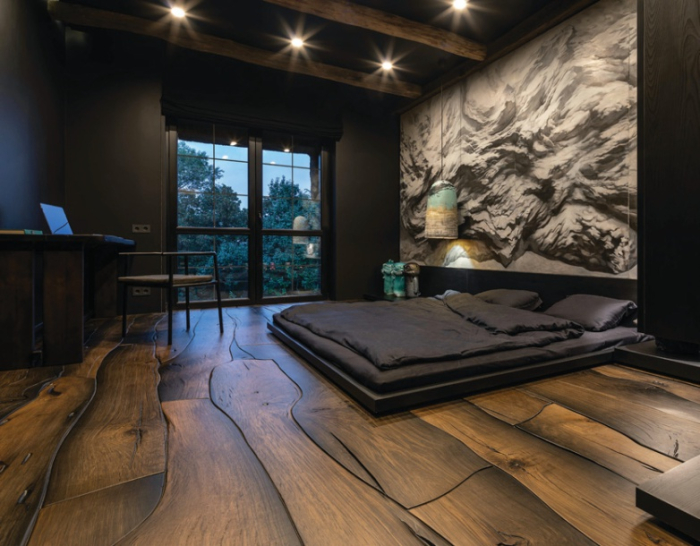 From the March 2017 edition of The Village Voice of Ottawa Hills newspaper:

In September 2016, when Sue Eidenier and her husband Aaron bought their house in the 3400 block of Brookside Road, they fell in love with the architecture and details of the 1929 home.

“We came from a brand new ‘Parade Home’ in Michigan,” she said, and the stunning details of the 88-year old home – from the original wood paneling to its leaded glass French doors – were a significant factor in their decision to buy.

As she assessed the condition of the home, the original cork floor in the first floor sun room was high on the list for immediate attention. With gouge marks from where a previous owner had slid a chair back and forth countless times, and an ill-fated project years ago to sand the floor in an effort to restore it, Eidenier worried it might be beyond saving.

“There are so many architectural details in the home. We didn’t want to go any other route (than restoration),” she said. “There is so much old detail, updating the floor would have detracted from the rest of the home.”

She asked around for a recommendation as to who to contact about restoring an old floor. “All my friends said Harms was the best,” she said, referring to Harms Carpet One, a flooring center in Maumee.

The 58-year-old firm specializes in carpet, vinyl, tile, hardwood, and laminate floors. In addition to sales and installation, the company has a significant restoration and refinishing service. They have completed countless projects in Ottawa Hills over the years.

Jake Harms, the business’ third-generation owner, wasn’t sure himself if the floor was salvageable. “She came in with a picture on her phone,” he said. “She wasn’t sure what to do. If she had to replace it, she wanted to stay close to the original, and was looking into the possibility of replacing it with fresh cork to stay true to the house.”

Harms wasn’t about to rule out saving the old floor, and sent a member of his team, Eric Parker, to the home for a proper on-site inspection. In addition to “pretty significant gouges” from the chair, discoloration from decades of exposure to the direct sun, and a build -up of wax, there was also damage from the haphazard sanding job.

“Someone went in there and did an extreme disservice,” Parker said. “They tried to sand it like any other floor.” Unfortunately they used the same larger grit sandpaper you would use if you were refinishing a hardwood floor. According to Parker, cork needs a finer grit, and the floor had noticeable scratches throughout.

Luckily the floor was thick enough – older cork was up to 3/4 of an inch tick – which allows for more flexibility in sanding and repairs. Parker was able to sand the floor, which consists of two different shades of 12-inch by 12-inch tiles. He used a combination of the dust from sanding, wood flour, and epoxy to create a mixture to fill in the groves and gouges.

Parker has been working on floors since he was 13. He moved to Toledo from Nashville, Tenn., in 2015, after repeated conversations with Harms, who was interested in Parker’s skill set. Parker had worked in many historical homes, dealing with a variety of challenges, including matching or changing
colors of exotic wood floors.

“I built my career on knowing how to handle older floors and materials,” Parker said.

According to Harms, cork was a popular flooring material from the 1920s to 1950s. Many of the galleries at the Toledo Museum of Art have cork floors.

“It is a sustainable, environmentally friendly material for flooring,” he said. “In Portugal, the cork has to be harvested every eight or nine years, or the tree will suffocate.”

Interest in cork flooring saw resurgence around 2005, according to Harms. “Back then we would have several requests a week about cork or bamboo,” he said. The popularity started to wane around 2013, but the store still gets inquiries about cork a few times a month.

“People that have it just love it,” Harms said.

“Cork is as durable as any other floor,” according to Parker. “Like any floor, with routine maintenance, it will last a lifetime.”

Posted on May 2017 in Company News, Cork, Our Portfolio, Refinishing, Testimonials | Permalink | Comments (0)

As a family owned company, Bona is dedicated to a sustainable philosophy inside the home as well as outdoors. We need to express our thanks and tell you how pleased we were with our hardwood project.

Eric is a true craftsman, extremely prompt, and very kind and we could not be more pleased with the work he did. His attention to detail and knowledge of color and finish was amazing.

We will continue to use Harms and tell everyone what a fantastic accomplishment was done to our floor! We wouldn’t go anywhere else! “We will be telling all of our friends about Harms Hardwood.

The floors look like they are new, Eric was an absolute joy to have in our home, and you can tell he treated our home like it was his own.

We couldn’t be happier.” How To Prevent And Fix Furniture Scratches On Your Wood Floor